Last week, a delightful little game was released on Steam called A Short Hike. It’s about your character, an anthropomorphic bird lady, who decided to get away from it all and head out to the mountains with her aunt. Your goal is simple: make your way to the top of the tallest mountain…

Last week, a delightful little game was released on Steam called A Short Hike.  It’s about your character, an anthropomorphic bird lady, who decided to get away from it all and head out to the mountains with her aunt.  Your goal is simple: make your way to the top of the tallest mountain so you can get cellphone reception.  At first blush it seems pretty absurd, but very quickly you find that you’re expecting an extremely important phone call from a family member.

So you head off through the woods to find a way up to the peak of the mountain.  Naturally, it wouldn’t be as simple as just going there.  You lack the physical capabilities to properly scale said mountain when you start out.  Soon after that realization, you encounter a mechanic that quite simply put, is a stamina meter.  You need to collect these golden feathers that expand your capacity for physical activity.  Whether it be climbing, running or flying, the feathers are the key to your success. 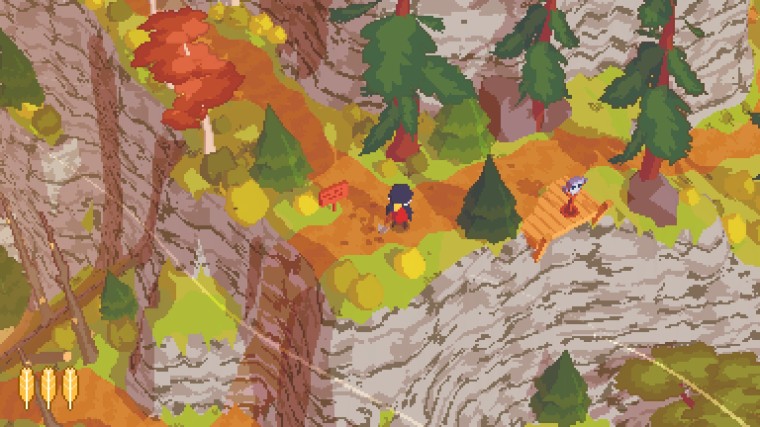 In total, you’ll need about 7 or 8 feathers to make the journey up.  The way you get more of them is through completing side quests through the quirky side characters that pop up along the way, buying them, or just straight up finding them in the wild.  It’s all pretty straightforward in terms of gameplay mechanics.

The characters are written well enough, with some genuinely chuckle-worthy moments sprinkled throughout their dialogue, but there isn’t any real characterization going on here.  By the time I got to the climax of the game, I didn’t find myself too attached to the main character and her quest to really feel the weight of it.

While the story is a little bit of a bummer, A Short Hike has a style to it that I personally really enjoyed, but I could imagine some people would hate.  Everything is overly pixelated, almost to the point of being completely overtaken by a mosaic effect.  It’s like someone took a GameBoy Advance game and blew it up to a modern resolution.  While that may sound odd, when it’s paired with the wonderful art direction and color palette the game boasts, it comes together pretty well. 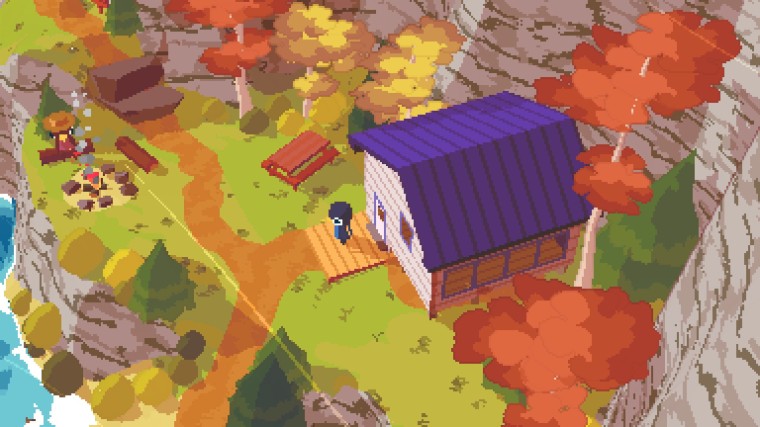 A Short Hike isn’t just a clever name though.  It’s a very short game, taking me only about an hour to beat.  I did a few side quests and explored a bunch before I decided to make my way to the peak of the mountain to see where the story went.  Once I got the scene up there and made my way back to the starting area, I accidentally triggered an event that resulted in the game ending and credits rolling.  The game didn’t make it terribly clear that this was going to happen, but it is what it is.

I enjoyed A Short Hike for what it was, even if there wasn’t much there.  It’s a calming and pleasant game that’s decent way to kill an hour or two.  It’s out on Steam now for $7.99.