Happy almost Halloween everyone. I don’t have anything spooky to talk about, just video games. Specifically The Outer Worlds, a game that I have no business enjoying, but still am…

Happy almost Halloween everyone.  I don’t have anything spooky to talk about, just video games.  Specifically The Outer Worlds, a game that I have no business enjoying, but still am.

The Outer Worlds is the latest Obsidian release, reminiscent of games like Fallout and oddly enough, Mass Effect.  The Outer Worlds sets you on a planet-hopping adventure around the galaxy in order to save colonists who are stuck in perpetual cryo-sleep, on a ship floating through space.

The other important thing to note about the world of The Outer Worlds, is that everything is controlled by corporations… but more overtly than we’re used to.  You quickly find out that the ship full of passengers you’re trying to save, has basically been shelved by a corporate entity and marketed as a mysterious disappearance to garner sympathy.  Or at least that’s what I took away from it.

Playing The Outer Worlds involves you doing the standard running around, exploring the world, and helping people so they’ll help you.  You know, the basic RPG stuff.  If you’ve played a Fallout game in the last decade, you know how The Outer Worlds plays.  Skill trees, companions, perks, dialogue trees, it’s all there and it’s all well realized. 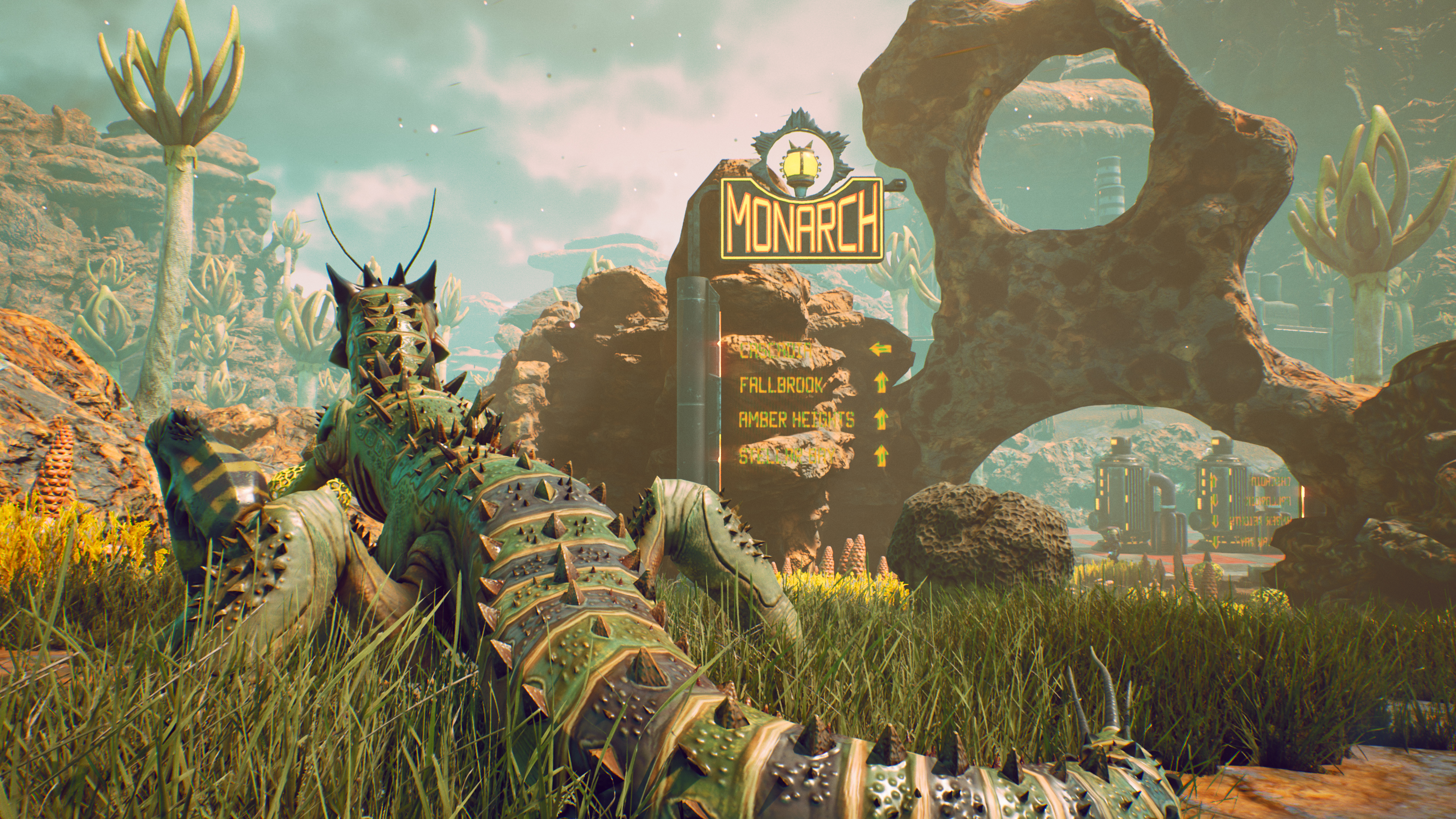 Now, I’m pretty confident I’ve gone on record by saying that I don’t really enjoy The Elder Scrolls that much, and enjoy the Fallout series even less.  I’ve found them to be clunky, aimless, unappealing and broken to varying degrees.  But weirdly enough, I’m having a phenomenal time with The Outer Worlds despite how it treads on this well-worn ground that I’ve grown to dislike over the years.

Maybe it’s because everything in The Outer Worlds is more appealing to me than any of the games it pulls its inspiration from.  The story is engaging in its own right, but the added layers of a corporate run dystopia backdrop and some stellar writing makes it all click into place for me.  Almost every character I’ve met so far, from companion to random quest giver, has been interesting in their own way.  I also really enjoy how instead of being thrown into a massive open world, you travel to different planets and explore those zones individually. 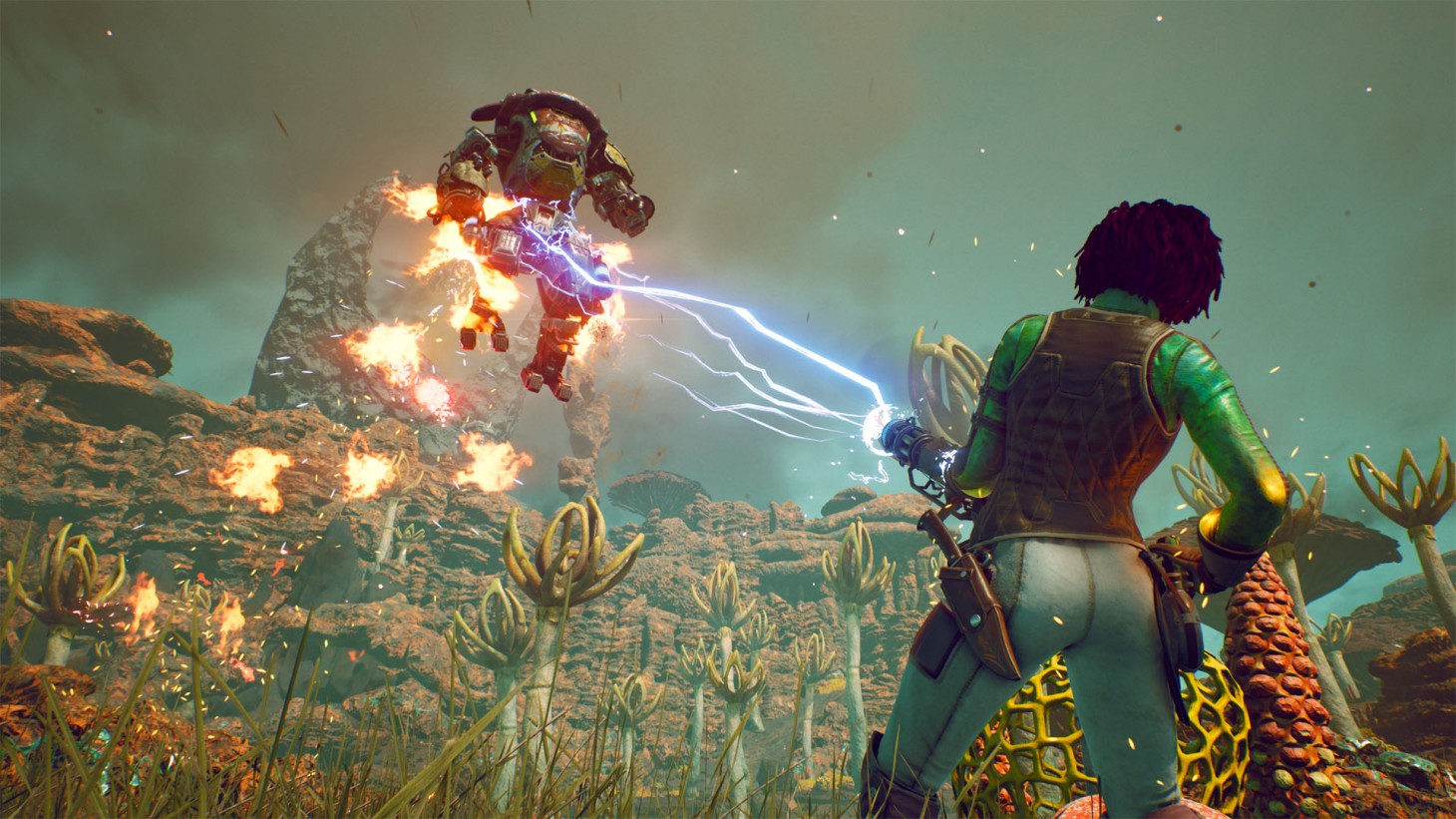 The Outer Worlds is mechanically sound as well.  The guns feel good to fire, the companion abilities are fun to deploy, and I’ve built out my character in such a way that I can basically talk my way out of everything.  Even better, I don’t have to engage with the systems I don’t want to.  For instance, you can eat food and consumables to gain temporary buffs, and I have never once done that and have had no issues with the game.

I know that none of the things I’ve praised are new developments in the game space.  But The Outer Worlds does them in a more mechanically sound and accessible way than the other games of its ilk, and that’s kept me engaged from moment to moment in a way games like Fallout failed to.

The Outer Worlds is a game I didn’t expect to enjoy as much as I am.  Maybe it’s the setting, or the gameplay, or the lack of glitches and bugs that are really keeping me invested, but I find myself wanting to keep coming back to it. 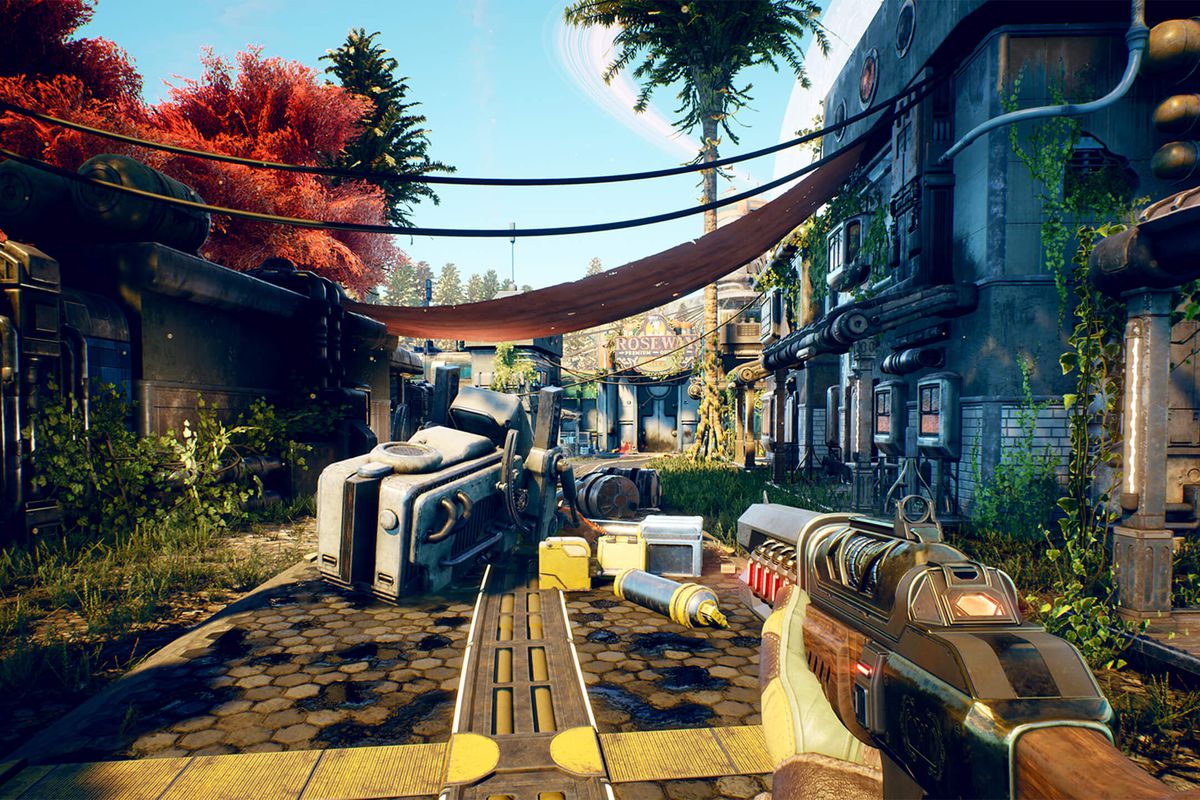 I’ve heard it isn’t a long game either, which is great news for me considering I didn’t want a game that was going to take 40-50 hours to beat.  Any complaints I have about The Outer Worlds are relegated to things like, texture pop-in and the occasional frame rate hiccup.   There are some locations in the game that have that Fallout grime on it that I’m not a fan of.  You know, where everything is covered in trash and people have shit smeared on their faces?  But it’s more tolerable here.  All I’m saying is that in either of those games, you think someone would grab a fucking broom and clean some of the shit off the floor.

Anyway, The Outer Worlds is great and you should play it.  I’m playing it on the PC through Xbox Game Pass, but it’s available on the consoles and through the Epic Games Store as well.