Skip to content
Coming Clean: I Will Never Play These Games
Articles

Coming Clean: I Will Never Play These Games

I’ve been living a lie for a very long time now. I’ve deluded myself and maintained these misguided beliefs for too long, and it’s high time I came clean and admitted the truth to myself. There are games I will never play, that I own and have installed right now. For months and in some cases years, I’ve had these games ready to go at a moment’s notice. Now it’s time to let go, uninstall them and let them live on eternally as painful memories of money I once had.

I’ve been living a lie for a very long time now.  I’ve deluded myself and maintained these misguided beliefs for years, and it’s high time I came clean and admitted the truth to myself.  There are games that I own and have installed, that I will never play.  For months and in some cases years, I’ve had these games ready to go at a moment’s notice.  Now it’s time to let go, uninstall them and let them live on eternally as painful memories of money I once had.

So here’s some of the games I’m breaking up with.

I recall playing in one of the beta phases of Destiny 2 and never playing it again.  Having a less than stellar time with its predecessor, the beta made it abundantly clear that Destiny 2 was not going to be the game for me.  Eventually it ended being one of the flagship games in a Humble Monthly offering and I installed it as soon as possible.  Nobody I knew had Destiny 2 or had any inclination of acquiring it.  Hell, I didn’t even want to actually play it, but somehow it sat on my hard drive for months.  Now it’s time I let it go and move on.

It feels like in order to properly enjoy Besiege I’d have to be an engineer, and that feeling was only reinforced when I’d look at some of the community creations on the Steam Workshop.  People were making functioning tanks, fire-breathing dragons, and actual Transformers while I was having trouble making a cart with wheel that could turn.  Downloading and playing with these creations is fun and all, but it’s nowhere near as engaging or satisfying as I imagine building them are.  So it’s time I was honest with myself and admit that I will never learn to be good at Besiege.

This is another Humble Monthly burden that’s been haunting my hard drive for a while.  I don’t know what line of reasoning I used to convince myself that I’d actually play this game, but it must’ve been good.  I historically do not play strategy games, especially hex-based ones, yet somehow Civilization VI has lingered on my computer for months.  I feel kind of bad for never having even attempted to get into it, but I need to face the facts and just cut this one loose.

It’s here that I’m noticing that maybe the Humble Monthly subscription is to blame for most of my lingering, delusional installs.  But that would be passing the blame, and that’s exactly what an addict would do.

Last month Blackwake was one of the three early unlocks for the July Humble Monthly subscription.  In the wake of Sea of Thieves being a huge letdown for my friends and I, Blackwake was a game that we briefly looked at to get our pirating fix from.  Being the only subscriber to the service in my friend group, you can probably go ahead and fill in the blanks as to why this one never got, and never will get played.  At best, I have a passing interest in pirate-themed games, and one that relies on having multiple friends to play with is pretty much a nonstarter.  So I’m cutting this one off before it gets anymore time in my library.  Blackwake, I hardly knew you. 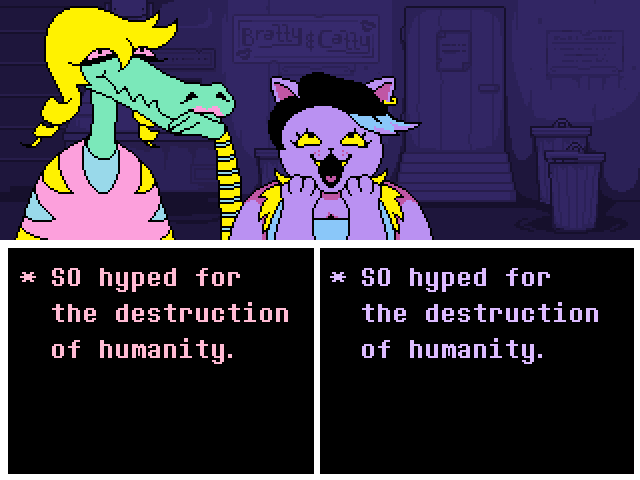 This is more of a symbolic gesture considering that Undertale basically takes up no space on my computer.  It isn’t that I had no interest in playing it, but having not played it when it first launched felt like I missed out entirely on the experience.  If you were following anything gaming related on the internet, It was kind of impossible to not learn about the cool things that Undertale was doing.  Everyone was talking about this game and how amazing it was, which is why I just felt like I needed to play it myself, but at this point I just don’t care anymore.

It feels good to finally free up some disk space on my hard drive, but it doesn’t change the fact that I could write a version of this article 300 hundred more times thanks to how much money I’ve wasted over the years on games I’ll never play.