After only a few hours with Pine, I came to appreciate its ambitious mechanics and intriguing story, but ultimately found it lifeless and repetitive…

After only a few hours with Pine, I came to appreciate its ambitious mechanics and intriguing story, but ultimately found it lifeless and repetitive.  It’s unfortunate considering there are a lot of interesting ideas at play in Pine, but I just found that they weren’t fleshed out enough and resulted in a lot of meandering and fetch-quests.

From the outside looking in, Pine is an incredibly charming and colorful, third-person action game that gives off vibes of various Legend of Zelda games.  You play as a boy who grew up in an isolated village atop a mountain, which goes about as well as you might think.  The mountain collapses, and you plummet down into the unknown land below only to discover that it’s inhabited by various groups of anthropomorphic animals with their own societies and villages.

What Pine tries to do is make you play with these various settlements by maintaining your reputation with these factions in order to accomplish your goal of resettling your tribe somewhere else.  Sadly, it sounds more interesting than it actually is.  When you walk into a town, there are two points of interest that basically dictate everything about the faction and their attitudes.  First are these signs that indicate how this settlement feels about every other tribe out there through a simple color scale: Green is good, white is neutral, and red is bad.  It’s said that you could play these tribes against each other and watch them wage war with each other, but I haven’t gotten far enough to see that in action.

The second, and possibly most confusing thing you find by these settlements are things called “donation boxes.”  As the name would imply, you can leave gifts for the settlement that you’re by to increase your standing with them.  Maybe I haven’t gotten far enough to really see these in action, but a donation box seems to be the way you pay for your heinous crimes.  Have you killed too many of a certain tribe or stolen their crops and resources?  Just look at what kind of flowers and rocks they like, and dump enough in there until your bounty is paid. I feel like this box undermines the whole concept of having consequences for aligning with a certain faction, but maybe that changes as you get deeper into the game.

Another bit of strangeness comes from how desolate Pine‘s world feels.  You’ll see a member of a tribe roaming around, picking up acorns and pine cones occasionally, but aside from that, I think I’ve only seen two types of wild animals. One was a predator, and the other was a mix between an elephant and a deer, and that was it.

“Empty” is kind of the one word summary of my time with Pine when I think about it.  I find myself just going from one quest marker to the next, picking up crafting materials along the way, and never really being pushed to check out a distant landmark or curious rock formation.

What also hampers exploration is the stamina mechanic.  In Pine, your stamina is always ticking down; Whether you’re fighting, holding your shield, running, jumping or walking, your stamina is being drained.  This singular mechanic was probably more responsible for my lack of eagerness to explore than anything else. 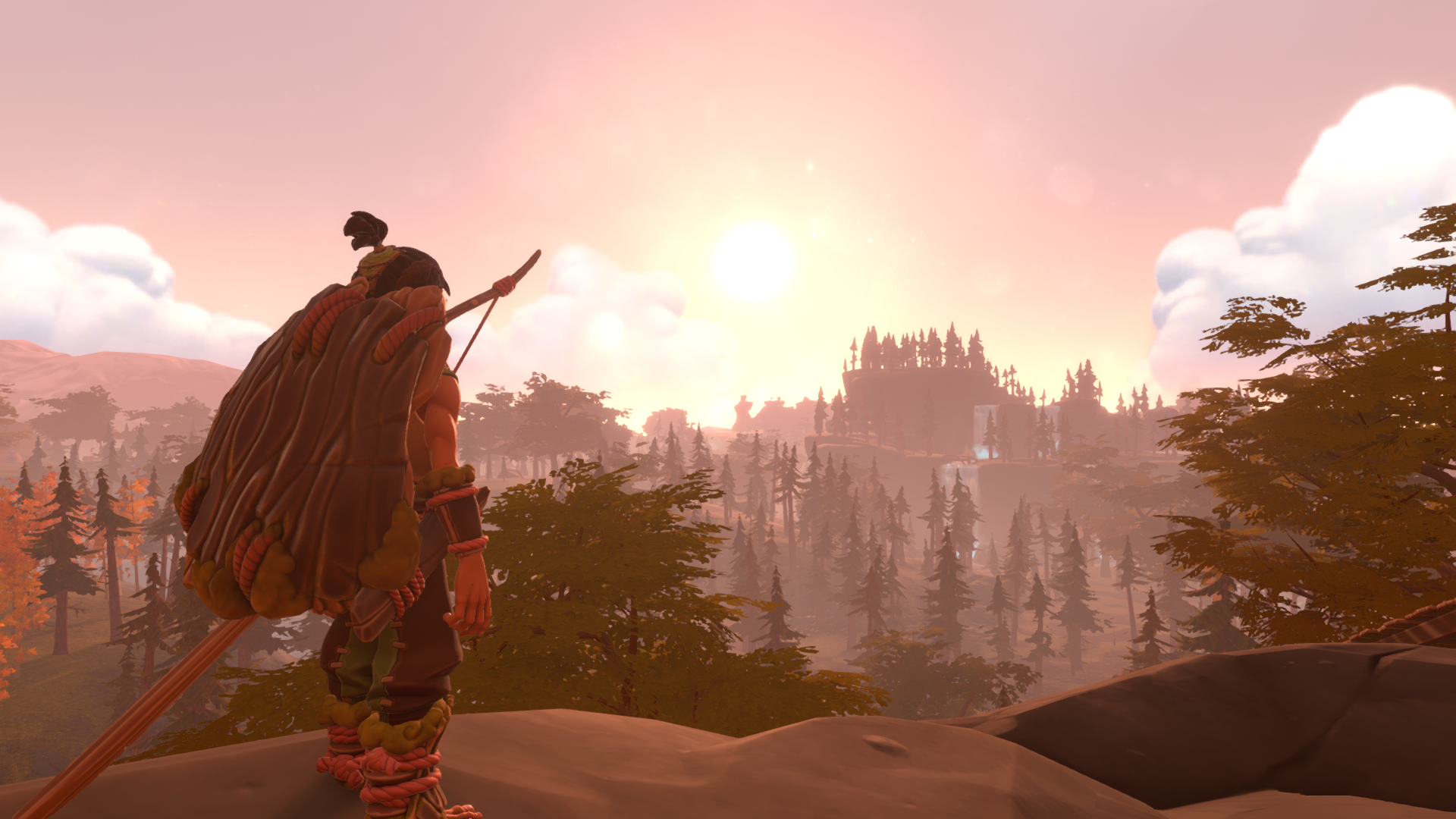 I really hope some big change is on the horizon because as of right now, everything I’ve done has been some form of fetch quest that has me gathering enough wood or hay to craft something.  Every quest has just been me ticking off a checklist in an effort to unlock a bigger checklist.  For instance, I recently got to a point where I was tasked with stealing tokens from members of each tribe.  That was after I had to collect ingredients for a potion, and after I had to find a watchtower and pick up the materials in it.

Pine isn’t a bad game, and I don’t want to give off that impression.  I think the combat has a good feel to it, the world is stylized in a bright and colorful, almost cartoon-like fashion, and the faction control element is really interesting.  But all of it feels very shallow at the moment.  Maybe I’m on the cusp of the training wheels coming off the whole game, or maybe it never gets there.  The only way I’ll find out is through playing more of it, and quite frankly, that’s the hardest part.

This article is based off of the Steam version of Pine, but it is also available on the Nintendo Switch.