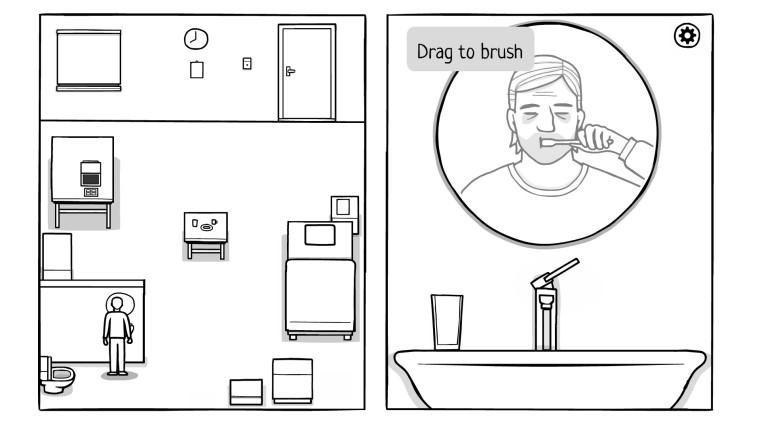 The broad pitch for The White Door is that it’s a psychological mystery game about a man who is in some sort of medical facility.  His memory is fractured which requires his doctors to frequently quiz him on details about his life.  The whole game sets up this idea that this man had a mental break after a series of failures and missteps in his personal life.

The story itself isn’t bad or anything, it’s just nothing of note.  It’s predictable and kind of dull in spots, and tries so hard to be mysterious but often ends up feeling as if it’s trying too hard.  It’s a shame too considering that on paper, The White Door sounds like it could be something interesting that shows a unique perspective on the issues it’s trying to raise.  It just never seems to nail the tone or atmosphere that it’s shooting for, however.

While the story itself is mediocre, the gameplay is somewhere between dull and bad.  It’s a point and click style adventure game that has you interacting with the environment along with playing a few mini-games, but the collection of puzzles included range from painfully easy to unbelievably obtuse.  Memorizing patterns and answering the questions your doctors give you are pretty straightforward, but later in the game you’re tasked with identifying symbols and numbers that in some cases, are almost impossible to figure out without some outside help.

I don’t mean to sound so hard on The White Door because I genuinely think there are some good ideas on display here.  The presentation and storytelling methods are neat and deserve to be fleshed out more, while the puzzles could certainly use some refining.  It isn’t a bad game, hell, you might even enjoy it.  It’s only about two hours long which is nice, but even in that short window I started to feel as if it was overstaying its welcome.  I’d be curious to see what a second pass at The White Door looks like, but I can’t say that I’m impressed with the game as is.