They brought out Andrew WK for this.  There was no gameplay or trailer at first, just Andrew WK and his band playing the trailer song.  Then the stream kept cutting to these people who were mildly disapproving of his music.  After the one song concert, two directors on RAGE 2 came out and decided to actually show the game.  But not before the longest five minutes of awkward conversation ever.

The game itself looks pretty neat.  The first big bullet point was “If you see it, you can drive it”, which was an odd thing for them to lead with.  But it looked like Avalanche expanded on the car combat stuff from the Mad Max game they put out a few years back.  The gun play looked frantic and fast paced will some cool abilities on display.

The whole thing has an aesthetic and are leaning into it super hard.  It’s over-the-top in a way that I’m definitely into.  It’ll be available in Spring 2018.

The sequel to the amazing 2016 Doom reboot arrives with an odd name, but it’s more Doom, so I’m in.  No additional information was given, but we were told at Quakecon this year we would see more of it.  From the look of things though, I’d say that hell has come to Earth, and we’re pretty fucked.

Todd Howard walked out and did a few minutes of his rehearsed standup routine about E3.  He killed that room.  Then they decided to make a joke about porting Skyrim to the Amazon Alexa.  I thought it was very well done.  Keegan Michael Key was in it, and he was very funny.

But then it was time for Fallout 76.  Set in the hills of West Virginia, you are among the first to tame this land.  That’s more or less what he said.  At this point I’ve seen a version of this Fallout 76 trailer 3 times.  This trailer in particular was the exact same one they showed at the Microsoft event earlier today.

Finally we’ve arrived at gameplay.  The staples of Fallout are on display, there’s a Pip-Boy, a floating robot, a vault and you leaving it.  After boasting the graphical fidelity of their world, they went to off to highlight some new enemies and nightmare creatures you’ll fight on your journey.

At this point they dropped the multiplayer bombshell and announced that it is “entirely online.”  They address some questions right off the bat.  Of course you can go it solo and experience the story and world on your own.  Then they emphasized that it is an open world survival game that wont have massive player counts to help it feel like you’re still in an apocalypse.  You keep your progress and dying doesn’t cost you anything significant which is good news.

We now see some cooperative gameplay mostly of people shooting stuff, but also emoting at each other and playing instruments together.  Oh also you can build shit.  Yeah, they blew out that building system from Fallout 4 so you can build a base camp and customize it with all the atomic garbage your heart desires.  You and your friends can build settlements which various creatures can come and fuck up from time to time should they please.  After killing said creatures, you can pop into a photo mode together and memorialize the moment forever.

Oh, also, there’s just fucking nuclear missile sites you can go to and activate.  You’ll have to clear out a silo, collect various nuclear codes, and then you can launch a whole nuke at some other players if you want.

Now that we’ve got the gameplay out of the way.  They announced a beta that at the moment of writing this, I don’t know if you can actually sign up for because as you’d expect, the site isn’t handling the entire load of the internet too well.  And now for a weird pivot to the cool ways you can pay for this game.  You can buy yourself a version of this game that comes with a glow in the dark map and a power suit helmet you can wear if you really feel like it. 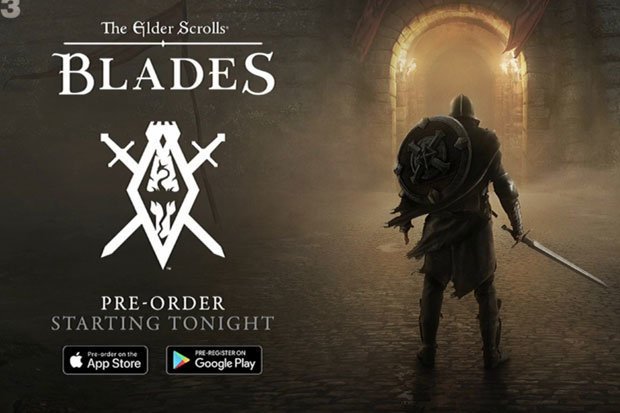 What happens if you take the Elder Scrolls and put it on a phone with Infinity Blade style Combat?  You get what looks like a fairly robust Elder Scrolls game that you can take with you.  Battery devouring aside, it genuinely looks impressive for what it is.  I almost typed out that I wasn’t sure who would play this game, but then I remembered it’s an Elder Scrolls game and the internet exists.  With a full story, a variety of modes and some social elements that remind me of Animal Crossing Pocket Camp, this looks like a neat game.  It’s free to play, but you can pre-order it for reasons.

“And one more thing…”  The classic E3 moment lives on with a teaser of the first new property Bethesda has created in 25 years, called Starfield.  It was just a video clip of a planet, so who knows what that is.  But it’ll be a while till we find out.  My guess is it’s gonna be a Bethesda RPG, but in space.  Bold prediction, I know.

“And one more other thing…” They showed a large mass of land with the text “The Elder Scrolls VI” and received a standing ovation.  “We’re working on it, so please shut the hell up already.”  TES VI is slated for release after Starfield, so who’s to say if it will even be on the current generation of consoles and hardware.