Skip to content
The Master of Disaster: Introduction – 01
Articles

The Master of Disaster: Introduction – 01

In the past, I’ve written once or twice about Dungeons & Dragons and how what once was something I’d never touch, has quickly become one of my favorite activities…

In the past, I’ve written once or twice about Dungeons & Dragons and how what once was something I’d never touch, has quickly become one of my favorite activities.  All of that still holds true, it’s just that in the past few months, I’ve gone from just playing the game, to running it.  It took a while to find the rhythm and understand my players, their needs and play styles, but I think I’ve got the hang of it… mostly.

Let me start by saying that I’m having a blast running a campaign for my friends.  They’re receptive to my ideas, they challenge me both in game and conceptually, and the whole thing has become an excuse to write more, which I will never turn down.  There have definitely been some stumbles and screw-ups along the way, but how else are you gonna learn unless you get messy?

I wont go into every aspect of what I’ve been doing, instead I’ll quickly touch upon my weekly routine.  First, I’ll look over the notes I’ve taken from a previous session and see how their actions have impacted the story thus far.  Turns out, you can write all the scripts you want, but your players can totally bypass any of it.  I’ve had pages of written dialogue and plot development that were just trivialized and passed thanks to an enterprising player of mine.  It isn’t a bad thing, it just taught me to loosen the grip on my story, and not get so precious about the details.

Then, I’ll write up a summary of the previous session to post for my players when they inevitably don’t remember a thing from the last session.

After that, I go into planning mode.  I look at where the players are in the story, what main quest they can do as well as what side quests are open to them.  If the players are in between quests, I have to think of a way to introduce them to the stuff that’s available to them.

Unfortunately, because of how I started our campaign, I’m kind of locked into some things from the adventure module that I don’t really like.  For context, I started by using the module, Waterdeep: Dragon Heist, which was a little overwhelming for me as a first time DM.  So after about three of four sessions of trying to pronounce names of NPCs and learning their history and motivations, all while trying to keep things moving briskly while being fun, I said “fuck it” and decided to go off book.

At this point, I’ve written about 200 pages worth of main and side stories, character bios, store inventories, and concepts that need to be fleshed out.  Maybe in the grand scheme that isn’t a lot, but it feels hefty to me.  More to the point though, because I used the Waterdeep book, now I’m stuck with the incomprehensibly poorly named gangs in the city, as well as a city map that’s way too gigantic and intimidating for my players.

After all of the writing and planning, now I have to do my least favorite part of making the maps.  We use Roll20, a pretty awesome tool for people to play tabletop games online, but terrible for assholes like me who decide they want to craft bespoke maps for any and every interesting place my players might visit.  But I do it, because it makes my players get a sense of place and scale while immersing them in my tapestry of words. 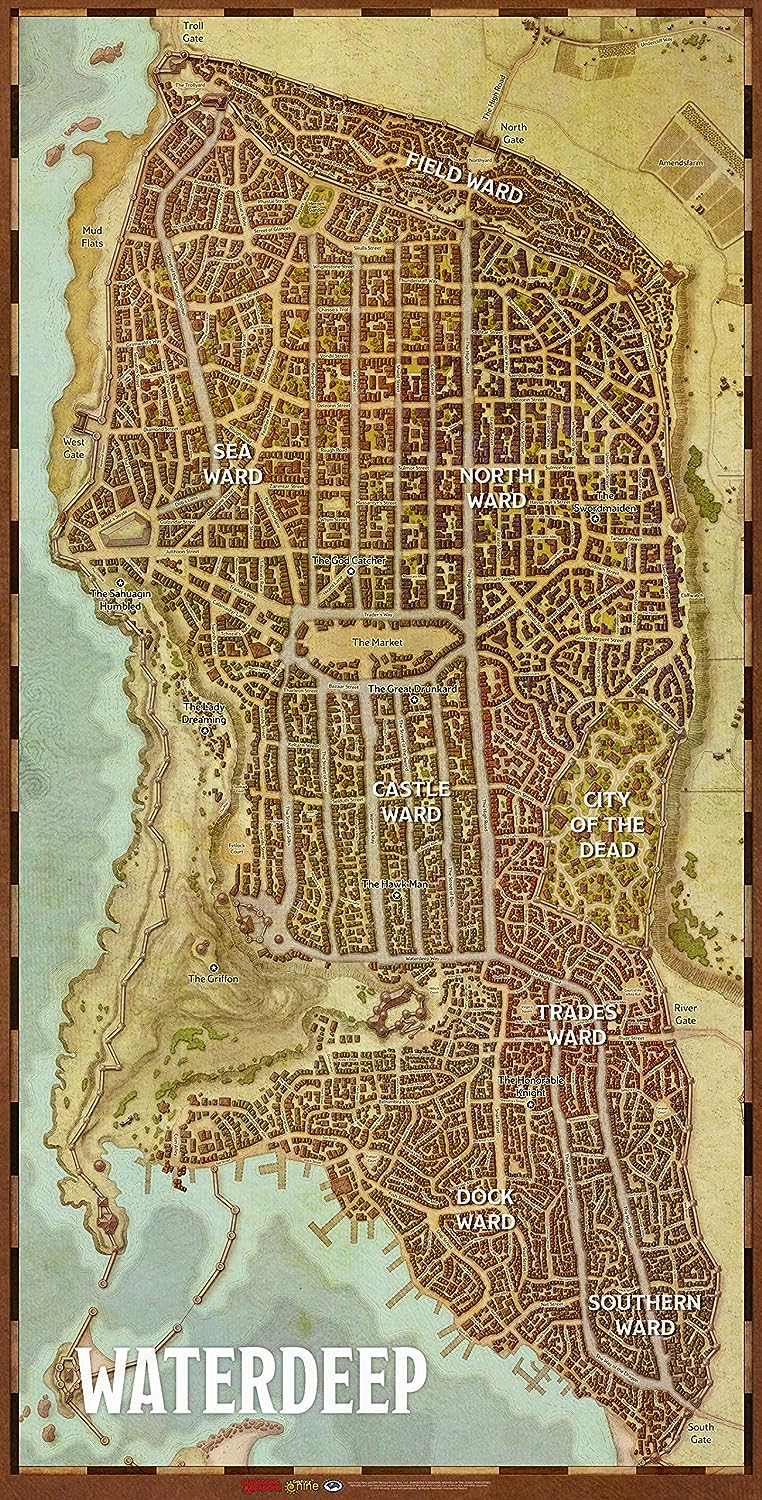 Lastly, on the day of the session, I panic all day, hoping that everything is in order and ready to go.  I have to remember the voices of the NPCs they might see which is a fun vocal exercise, but in reality they all end up sounding vaguely the same anyway.

If I had my way, which I guess technically as DM I do, I’d level the entirety of Waterdeep and introduce them to a smaller, more well defined and manageable map to play in.  I bit off more than I could chew at the beginning, and now I’m stuck with some of the bullshit from the book.

All things considered, I’m glad I went off book.  Making my own characters and knowing them and their origins helps me have more valuable conversations with players.  No longer do I have to worry if I gave something away or said something that character doesn’t really know.  No longer do I have to feel bad for not knowing the long lineage of the Neverwinter family.  Why?  Cause they don’t fucking exist in my world anymore.  They all died when a pack of gorillas rampaged through their home and ate them.

Going this route has been a lot of extra work, but it’s work that I love.  I’ve never felt so creatively satisfied until I started writing and brainstorming for this campaign.  I also get to play fast and loose with the rules that just makes the game more enjoyable for everyone.  I’m not gonna make someone collect the core ingredients they need for a spell, cause that sounds super boring.  I’m here to tell a tale of whimsy and adventure, not to orate a session of Rust.